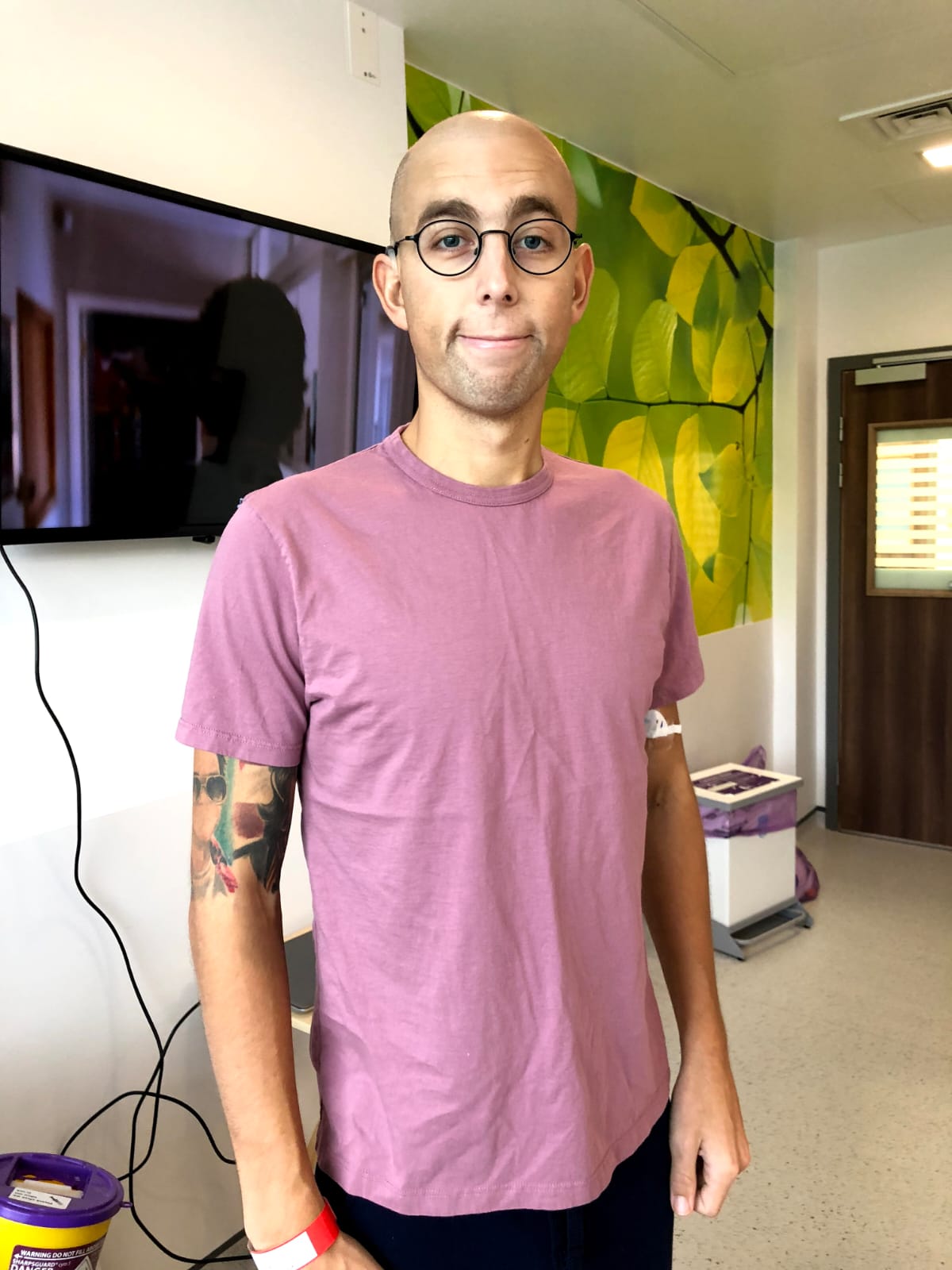 I was born and raised in a small village in north Wales, living with my amazing family; mum, dad, and my older brother of 18 months. After high school, I started college but dropped out quite early on. I was in and out of dead-end jobs, including bar work in Greece before completing my Personal Training qualification in Spain. I knew I’d found my passion in life as it was the only thing that truly motivated me. 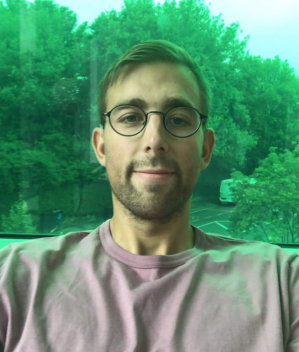 At the age of 21, whilst living my life as a strength and conditioning coach and keeping extremely fit and healthy, I started feeling ill and getting nose bleeds, and there began 9 months of GPs telling me I was fine. I became weaker, started bruising randomly, lost 20kg, was having random bouts of nausea, and even started losing the hearing in my right ear. I was a mess, I couldn’t work, and I was screaming for someone to tell me what was happening! One Saturday, I was watching a movie when I went completely deaf. There was a really loud noise in my head, and it felt like something was squashing my brain – I was in absolute agony and felt the only way I could stop it, was to end it there and then, but luckily (we could say) I was unable to move. My brother dragged me to the hospital, and the next thing I know, I’m waking up, deaf, with my family around me. They transferred me to The Christie Hospital in Manchester, and after more tests I read the word “Leukaemia”.

My brain had haemorrhaged; 3 bleeds on my brain and told I had only a couple of weeks to live with chronic myeloid leukaemia. I started treatment in an attempt to prolong things with oral chemotherapy and I was hooked up to a machine that filtered out my excessive white blood cells. It was really hard keeping track of everything – I still have the 10 A4 notebooks filled with the conversations I had during those few weeks. I managed to get over several hurdles and with treatment, the leukaemia was under relative control. After 7 weeks of going in, I was discharged. I was still deaf, learning to walk again (by this point I’d mastered only penguin level!), and wasn’t able to balance. 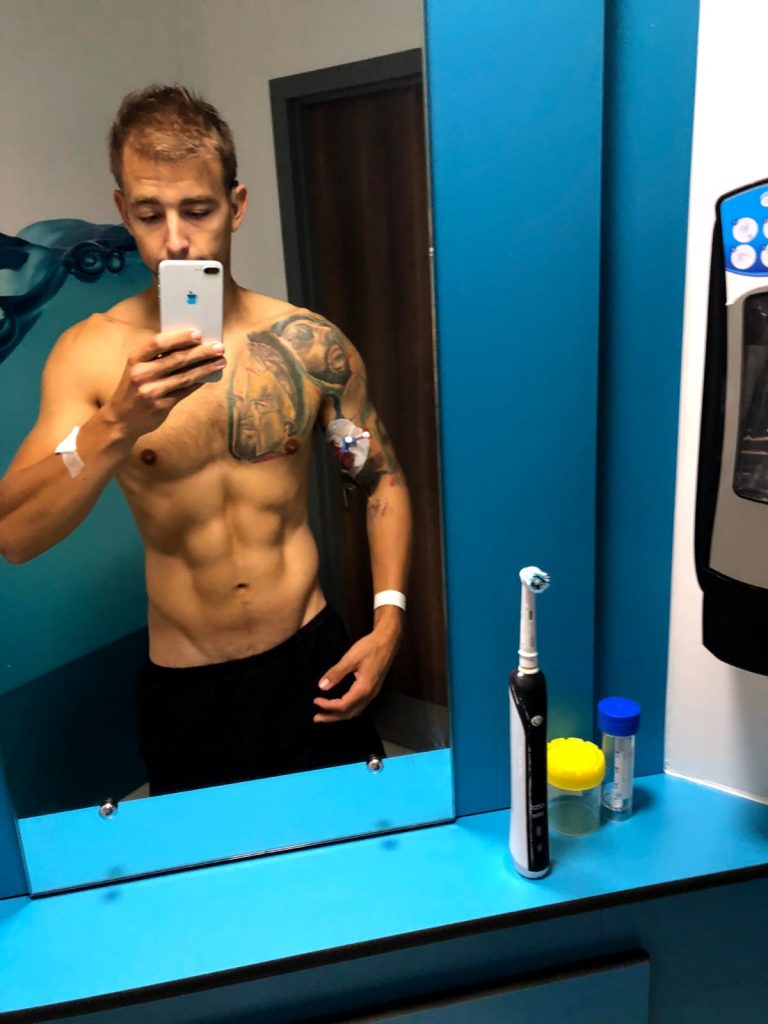 I was devastated. I’d gone from a healthy young man, to a weak and deaf little boy in a matter of months. I could barely walk and when I could, the slightest busy pattern in sight would throw me off and I’d fall. More news came and I was told that my hearing would never recover. The haemorrhage had damaged my auditory nerves beyond repair. Recovering from the haemorrhage was the hardest part of all of it. I was having moments where I felt like I was in a video game, not really inside my body – it was overwhelming and would send me into a panic attack regularly, which just made me feel like I was haemorrhaging all over again.

I continued with my small exercises and was offered a cochlear implant. They drilled through my skull and fitted a device that helps me to hear. I hadn’t learnt sign language, but I had learnt how to lip read so with the implant and that new skill, I was getting through okay. It took 18 months to get my hearing where it needed to be. Everything sounds very robotic and different to regular sounds. I’d miss parts of conversations, songs I like don’t sound the same, and new ones make no sense at all. Luckily, I found comfort in podcasts and audiobooks. 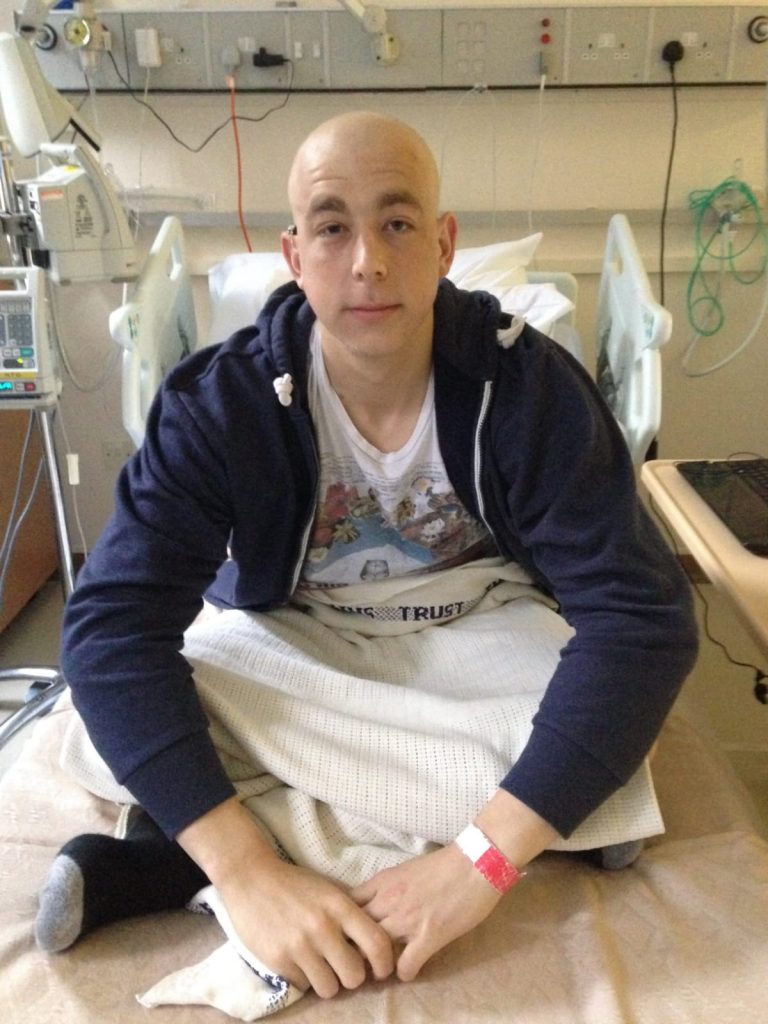 I decided I was ready for my next challenge and got myself a job in a warehouse. I was ridiculed for my lack of hearing and the way I spoke. The company didn’t understand what I was going through and with no support from them, I wasn’t prepared to continue being abused. Then, more news; my treatment was slowly stopping to work, and the only answer for me would be a bone marrow transplant. I prepared my body the best I could and gained as much weight as possible to counteract the side effects. I was strong and I was ready to receive the 100% marrow match from an extremely generous non-related donor.

The second I walked through the door, it was full-on. Within the hour I had a central line fitted, which was a gruesome and an absolutely horrendous experience. I was sectioned to one clean room and anyone who entered had to specifically cleanse before entry. I was having injections, was fed and hydrated via tubes, having chemotherapy and like a lot of people in this situation, contracted level 3 Mucositis where the lining of my digestive system became severely inflamed. It’s the third worst thing to have happened to me.

The transplant was a success, and I was surprising doctors daily with my progress. I was allowed home but not out (due to low immunity), my anxiety was through the roof due to being confined for so long but I was alive. I eventually started working in a coffee shop in Liverpool, but I was suffering with immense nerve pain in various parts of my body. I continued to struggle for 3 years. My back was like a cement wall, my knee kept falling out of place, and I was having to stretch my whole body on a foam mat at regular intervals and I eventually couldn’t work. 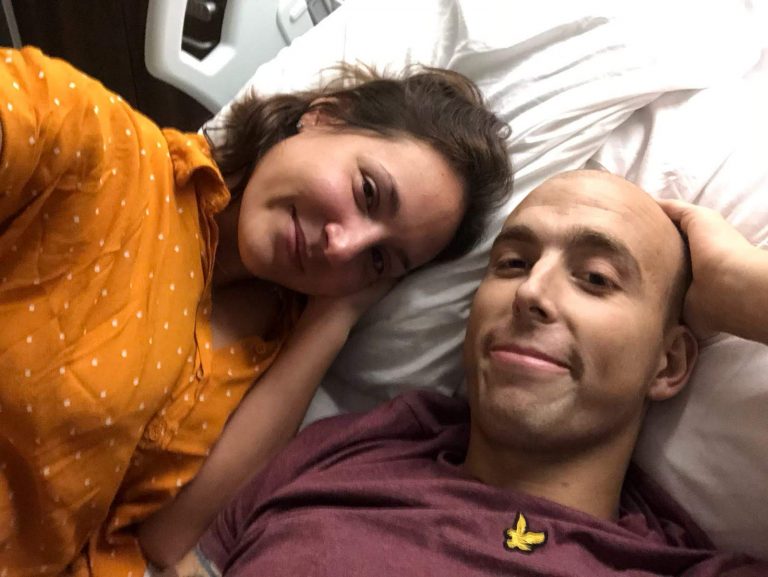 I had completely lost my identity. I couldn’t work, I couldn’t work out, I couldn’t do any of my hobbies or the things I loved. I remember during my treatment having two huge regrets. Firstly, I had never been in a serious relationship and loved someone in that way, and secondly, I had never travelled and experienced the world. Therefore, I decided I’d had enough, packed my things, my hearing aid and my penicillin (due to my spleen not working after treatment), and headed to Argentina for 6 months. There, I met my girlfriend and learnt so much about coffee (because I’d loved working in the coffee shop so much). I quickly realised that I’d put all of my eggs into my gym basket. Strength and conditioning had been my life, but my body wasn’t allowing me to be apart of that world anymore. So I started reading, and that became my new hobby. I was listening to and reading fiction, non-fiction, political and educational material – I was loving it and continued when I returned home.

After the 5-year mark hit; more news again. This time, more cancer, more aggressive. Acute lymphoblastic leukemia. I was back in at The Christie Hospital and was told the only possibility of survival was another bone marrow transplant with extra amounts of chemo leading up to it. The doctors were honest with me, telling me I wasn’t in a good position. I had told myself I would never go through a transplant and chemo again, but once you are told its that or death you have to really dig deep. I clicked myself into survival mode and was ready for another fight but the fight to come was bigger than I could have possibly imagined. 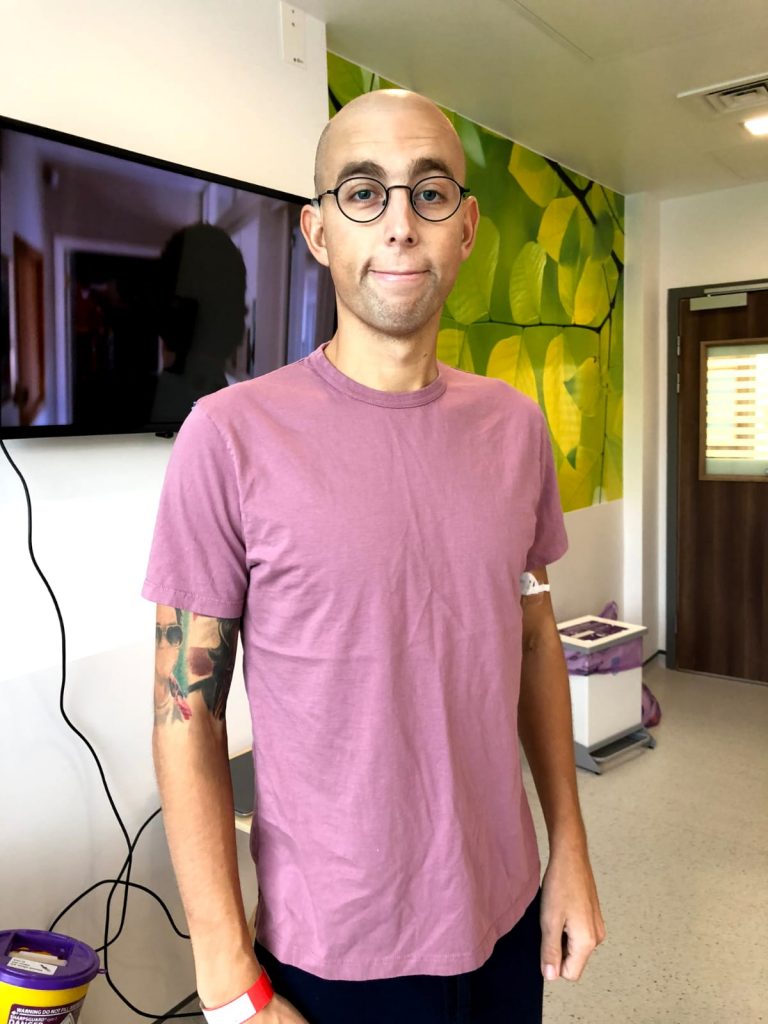 I had an extremely painful growth in my bowel that made going to the toilet a horrific and dangerous experience. I contracted level 3 Mucositis again, surgery on my bowel didn’t work, I had full body radiation treatment. I was unrecognisable, a skeleton, and I so nearly died. By some miracle, I received another bone marrow transplant from another complete stranger who happened to be a 100% match. It was a living hell for the next three months, but I had to keep fighting. I planned my future, focusing on getting fit and healthy, spending time with my loved ones, and so on.

I fought, and I won. Three months ago, a biopsy suspected the leukaemia had returned but thankfully I got the all clear and continue to be in remission.

It’s been a 7-year journey. My advice to anyone going through similar would be;

My advice to the family and close friends of someone suffering with cancer would be;

The Christie Hospital has saved my life 3 times and given me an extra 7 years so far! They are professional and friendly and they don’t sugar-coat things, they’re honest and make you feel comfortable with their approach. They humanise everything and have a great sense of humour!

My future, I don’t plan too far ahead. If my leukaemia returns I will not be allowed any more treatment. I’ve had more chemotherapy than anyone alive and it is extremely rare to have received two 100 % non-related donor bone marrow transplants. I want to travel, and I want a career in coffee somehow. I view death quite differently now and find the scary part of it is actually the overthinking. When I die, it will be like before I was born, and I don’t remember that, so I’ll be okay.

I saw my situation as having two outcomes. If you keep fighting, eventually it is going to pay off! Under the positions of cancer, granted it may not pay off, but you will always be able to say that you tried as hard as possible and yourself, your family, and your friends will be so proud about it. Never give up! I am living proof of what that fighting spirit can achieve.

Show Me The Way