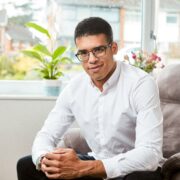 Unravelling into my authentic self

I grew up in Bolton from a mixed-race background in a working class setting. Initially at primary school I was curious but disruptive, however it quickly became clear that with a little focus I could achieve excellent grades. I went on to become the first member of my family to attend university, a proud achievement for not just myself but also my parents and set a precedent for my two younger brothers.

During my second year at university my life began to unravel. Balancing my degree, work and social activities I neglected my own self-care to the point where I became unwell. Events occurred that knocked my confidence, and I started to avoid doing things in case I failed. I felt like I didn’t have anyone to relate to. I was a crazy mix of ‘entrepreneur, scientist and philosopher’ rather than the ‘normal’ mindset of a young black male. I was isolated and didn’t have anything to turn to, so I locked myself away from society. I could feel myself spiralling away from life and tried to block everything out. Lonely, scared and without the awareness of mental illnesses that we have today, asking for help seemed impossible because of the stigma that was associated to it. After 2 weeks locked in my room alone, I had not only hit my first pothole in life but fallen headfirst into it!

My parents had to come to university to rescue me and take me back home. I used the recovery time to reflect on where I was in my life. I realised I needed to fix myself before worrying about other things. I took accountability and reset my priorities. I had not failed! It was the scenario and environment that I had been within that had failed me. I started to appreciate that not everyone is meant to know what they will do for the rest of their life straight after education, and that is ok! I accepted where I was, what had happened and how I was going to move forward.

I bounced back to complete my degree and gain a place on a Graduate scheme as a financial advisor, but the financial crisis hit, and 6 months in my training was withdrawn and I was made redundant.

Sat in the back bedroom of my parents’ house again, looking for jobs, I quickly realised that there was just nothing there! Could this be any worse? However, I thought back to my time at university and drew on this resilience to accept where I was and treat this obstacle as an opportunity!

I decided to take control of my career path and used the money from a job at Bolton Council to create my own Video Game business. I had nothing to lose, and fortunately after a couple of months the business took off! I was suddenly taking a 6-figure revenue within 7 months, using the back bedroom as a distribution depot leading to me buying my first house within a year. All of a sudden ‘little Lee’ had this business that doubled its revenue for the first 3 years. It was all so quick.

During this time, I was still working at Bolton Council alongside developing my company, and I was still searching for a role that I really could engage with. Eventually I stumbled upon an opportunity to work for a charity helping people get back into work and having experienced this for myself I felt I could make a real impact. I was able to mentor people going through the same career confusion that I had. I was offering advice, interview support and professional development; and to see them gain employment at the end felt amazing! I really wanted to understand how I worked as a human being, so I decided to complete as many qualifications as I could. Courses in nutrition, strength and conditioning and football coaching led me to a role at a sports performance company. I was able to gain some amazing experience, but I started to realise that my values didn’t align with the cutthroat industry of football academies.

All of a sudden, I was unable to walk.

My immune system began to attack the connective tissue in my joints and suddenly I am in Blackburn Hospital in complete shock! I had a son that was 18 months old and a wife that was 6 months pregnant, and within a week I had gone from playing team sports to lying in a hospital bed unable to even feed myself properly. It was a slap across the face and a big wake up call!  I was 29 years old and I had just lost all of my independence. I started to question ‘how was this fair?’, my son was asking me to play and my heavily pregnant wife was having to come to hospital to look after me following a day at work.

I can remember looking out of the hospital over the hills towards Bolton where I had grown up, thinking how I hadn’t been grateful enough for so many things in my life. I knew that I had to bounce back for my kids, so I set myself the challenge of being able to walk again before my newly born daughter. It took me 11 months to finally walk a mile unaided, and it definitely proved to be a really ‘honest experience’ going through this challenge. Through the ups and downs I grew a lot. I had to be consistent and resilient, my actions where based on who I wanted to become which was back on my feet playing with my kids. Now, 6 years later I am back 70% physically, but as a person I am 200% the person I was before!

Through all the physio and hydrotherapy, I was never offered support for my mind to understand the reality of chronic illness. As a result, I developed the idea for my new company Essentialise, that aims to help people achieve their potential through coaching and workplace wellbeing. I want to support people to understand why they decide to do the things they do, and to optimise their time to get the most out of life. I really want to help people to cut out the noise and enable them to realise that you only need to do a few things really well to achieve success.

2020 has been a year of adversity for many people. I’m actively on a mission to positively impact a million people in my lifetime and if you want to make 2021 a year of positivity, it starts with you being kind to yourself, and kind to other people.

ENTREPRENEUR | MENTAL HEALTH | SURVIVOR
Manage Cookie Consent
To provide the best experiences, we use technologies like cookies to store and/or access device information. Consenting to these technologies will allow us to process data such as browsing behaviour or unique IDs on this site. Not consenting or withdrawing consent, may adversely affect certain features and functions.
Manage options Manage services Manage vendors Read more about these purposes
View preferences
{title} {title} {title}
Skip to content