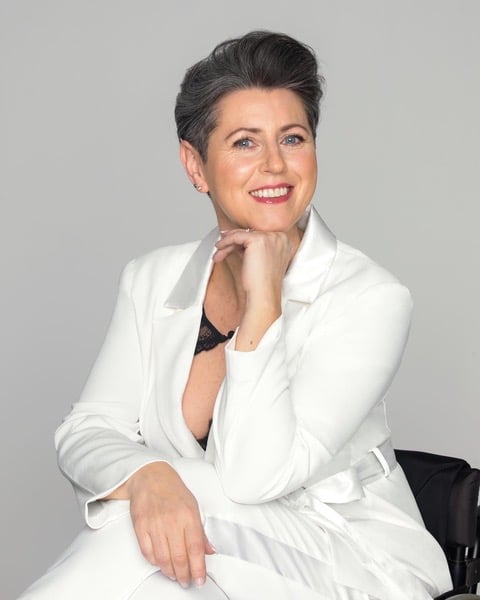 My name is Sandie Roberts. I’ve overcome adversity to become a voice and representation for disabled women.

I currently live in the Cotswolds but I was originally born on the South Coast and have now lived all around the world. I have a spinal injury, some issues with my hips and joints, alongside a neurological condition which means I’m a full-time wheelchair user. My health has greatly impacted me in the past 3 years but has caused challenges on and off from 15.

We had a difficult childhood; my mum was a single parent for a while. But I think adversity, at a young age drills into you the importance of striving for your best. I got my first job at 12, working as a chambermaid in a hotel. I lied about my age to get that job and have worked non-stop ever since. Working hard is important but has become a bit of a curse for me.

In my early years, I was an A grade student, danced and did gymnastics. Failure was incomprehensible to me. But a fall down the stairs at 15 left me with serious damage to my back. I was already unhappy at the time, as I had been severely bullied at school but I hadn’t told anyone. At just 12 or 13, I contemplated taking my own life because of bullying. I believe bullying should be dealt with on the same scale as physical assault, the damage it causes is severe. The impact it can have on people’s lives is the same.

So everything got too much for me. I wasn’t able to dance or train anymore and was in and out of the hospital. They didn’t know if I’d ever walk again and being bedridden did extreme damage to my mental health.

Eventually, after many surgeries, I was able to walk again. Despite my new challenges, I still tried to strive for success. I tried to resume normality and years later I got married and had 3 children.

My marriage didn’t work out but I learned a lot through that experience, particularly about myself and forgiveness. I realised that in difficult situations it’s easy to place all of the blame on someone else.

I was a stay at home mum for a while but as my children got older I realised it was time to reignite my independence. In my 30s, I went back to university and studied illustration, finishing with a first-class honours degree.

I loved every second of my time at university. After leaving, I went into teaching, at the same university I’d studied at, and started a couple of businesses. I had a brand and design company and also used to write people’s personal history, which I thoroughly enjoyed.

It was a challenge, parenting whilst at university, but I think it was important to show my children that I put energy into myself and that there’s more to life than just being a mum. I was very young when I had my first child, I was in my late teens. I hope I showed my children that I was a young mum but I was also a young woman and that’s ok.

I’m now remarried to a lovely man. I moved to live with him in the Cotswolds. I was working in a regular office job helping people over the phone.

I started getting a lot of startling symptoms but I continued working even though my health was seriously declining. My strongest symptom was really bad dizziness. We went on holiday and I couldn’t even walk down the corridor; I had to use a walking stick. My legs had started to feel disconnected from my body.

I was at work and they noticed how unwell I was, suddenly my face dropped and it looked like I’d had a stroke. I went to the hospital and they told me I had had a ‘functional stroke’, which is like a software malfunction in the brain.

Over a few days, my face and body changed but my leg movements never came back. I discharged myself because they said there was nothing seriously wrong with me but I still couldn’t move my legs. I had a narrative of internal ableism, I just didn’t want to make any fuss or bother anyone.

Then a black hole settled over me and I felt I was making it up. There was no treatment pathway offered and I was just sent home. We were just left and I was suddenly disabled and felt like a complete burden. I didn’t even want to be alive.

Functional neurological disorder (FND) has similar symptoms to MS and Parkinson’s. The signals get confused in the brain, making it difficult to move parts of your body. There isn’t much research but they do know it can be triggered by a traumatic event, such as a mental shock or a physical trauma. I had had a bad chest infection and that’s what triggered mine.

You can’t cure it but you can attempt to minimise symptoms and there’s the possibility of remission. It took a long time to come to terms with because I had to grieve for the future that I thought I was going to have.

After my diagnosis, I felt as thin as a wisp of mist in the shape of a woman and if a strong gust of wind came along I wouldn’t exist anymore. I started therapy because I felt I didn’t want to burden my family anymore. We started working together and unpacking so much.

At the same time, I started my Instagram account. I was alone, as none of my friends lived locally, but I found great support online in the chronic illness and disabled community.

I searched for representation for disabled women in midlife but couldn’t find any. I decided that instead, I would become the full me that I know I am within. I wrote a series of posts about my new journey and they seemed to connect with a lot of people. That was around 18 months ago and I’ve started to post a lot more about living comfortably as a disabled woman; including issues surrounding sexuality, body confidence and mental health.

For me, it’s always been that if I can help just one person everything will be worth it. Through my experience, I’ve become so much better; more empathetic, sympathetic and much stronger than I ever was before. I went from the wisp to the woman with the strength of a rock and I believe the desire to help people is what drives me every day.

ADVENTURE | EXTREME CHALLENGES | MENTAL HEALTH | SEXUALITY | SPORTS | YOUNG PEOPLE
Manage Cookie Consent
To provide the best experiences, we use technologies like cookies to store and/or access device information. Consenting to these technologies will allow us to process data such as browsing behaviour or unique IDs on this site. Not consenting or withdrawing consent, may adversely affect certain features and functions.
Manage options Manage services Manage vendors Read more about these purposes
View preferences
{title} {title} {title}
Menu
Skip to content