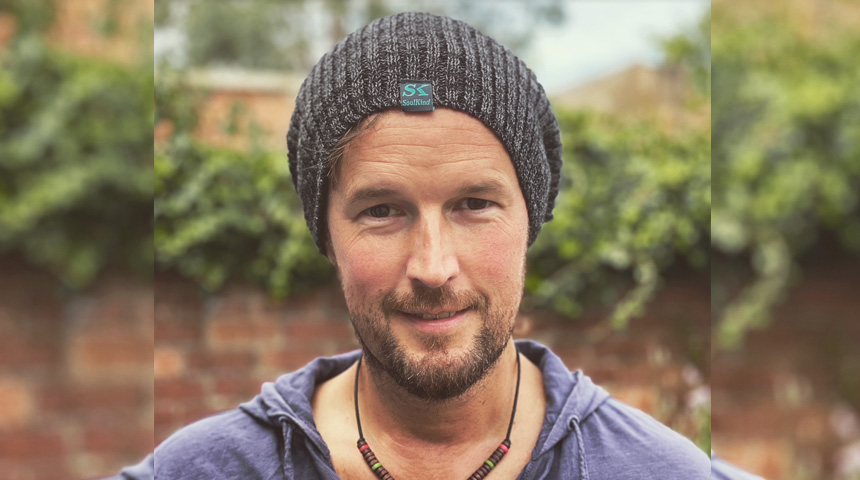 “Inspiration comes from the ability to listen to someone.”

I am from a town outside of Gloucestershire in the heart of the Cotswolds. For the last 15 years, I have been running a brand consultancy but two years ago I had an accident which changed the course of my life.

I was one of those kids that couldn’t do anything but games, PE and art, so school for me felt like a bit of a write-off; however, thankfully I was good at art which is probably what gave me the spark to go to art college in Cheltenham.

I went to Salford University to study graphic design in 1995 and moving to Salford was quite an eye-opener.

When we arrived, my parents and I stayed in this group of high-rise flats. Two of these were converted into halls of residence and the other was a building for young offenders surrounded by a perimeter fence with barbed wire.

I remember one night these lads showering our tower block with fireworks for some days.

On the other hand, the nights out at Hacienda were just insane, and I look back on my Salford days fondly.

After university, I ended up in London to begin work. And this is where graphic design became my career path for the next 20 years. I think that if you get to do something that you love and you get paid for it, it is such a privilege.

After building a client base up, business was buoyant, and I was making good money. Then in 2018 just as things were taking off I was involved in a car accident just before I was due to go on holiday.

I had one last job to do which was to take the dogs up to the kennels and on the way back, coming down the A40, a car came around a big sweeping bend and took his eye off the road, drifted into my lane and hit me head on at 50mph.

My life changed from then. It took the fire service 3 hours to cut me out and I had broken my neck in two places, my lower back, my left arm and wrist, my right thigh, my left leg tibia and fibula, both my ankles, seven ribs and I ruptured an artery in my neck which formed a severe blood clot in my neck.

I feel as if something was watching over me that day. At the time of the crash, there were two guys driving in and out of town. One stopped and jumped into the wreckage of my car and held my head up to allow me to breathe whilst another guy jumped into the back to help him out.

If it wasn’t for these two men, I probably wouldn’t have lived. To say ‘thank you for saving my life’ to someone is something you’d never think you’d have to say.

When the paramedics arrived I was ranked as a 2 on the Glasgow coma scale which essentially meant that I wasn’t going to make it; however, this one doctor stayed with me and he became the third person in this chain of people to save my life.

Instead of picking me out of the car they picked out the whole driver’s seat and I remember seeing the tree above me as I was lifted out of the car. The ambulance turned up and the next thing I know is that I was in intensive care in Bristol.

Subsequently, I have been on this slow journey of recovery since.

This time last year, for example, the metalwork in my leg collapsed and I had to go into an operation again to fix a cage around the bone to allow it to grow back.

I feel I am the same person as before the accident, but I’ve seen the world in a different light. I know now for sure that money is not the thing that will make me happy. The most important thing is family and friends.

I met a guy last year in Hollywood who had a motorbike accident and nearly died. He thinks that he is lucky because his accident made him a better person and I am inclined to agree. The accident made me grow up and realise what is important in life.

I don’t value monetary wealth as much as I do internal wealth now more than ever and I’ve never been happier than when I have been sitting around a campfire with friends with a beer.

Mental recovery however has been torture. I have had counsellors who have helped me to combat negative feelings and PTSD about the accident, but I do genuinely believe that we can sort out a lot of our own problems.

Sometimes, just to stop and give yourself a break works to combat these negative feelings. Even before my accident, I had dark periods that would come and go because my head is constantly whirring.

Trying to slow this down in order to understand my own problems has helped.

Plus, there is so much to be said for talking and listening to somebody without judgement.

This is the basis of my magazine ‘Soulkind’. It was something I was working on before the accident because after 20 years in the industry, I was beginning to feel a little constrained and so I teamed up with a friend who is a photographer.

After my accident, I had this thought in the hospital bed that human resilience is an amazing thing. And I thought that the magazine could solely focus on this; however, I remember a friend saying that if we focussed too much on stories of resilience we would end up in some pretty dark places and I agree, so for me, all the stories had to have a happy ending.

We started thinking about the mindsets of adventurers who had accomplished great challenges. I looked for people to piggyback onto (figuratively) who could help me with my own journey of resilience.

We would go out and seek extraordinary people to get to know and spend a day with them. Afterward, we would do a photoshoot and write an article about what it was like to meet them.

After a full day, people’s guards begin to come down and they become themselves. And that’s what we write about.

I think especially with people who have accomplished great adventures, we tend to put them on a pedestal, but our aim is to break down those barriers and show people how they can accomplish these things too. The challenge doesn’t have to be crazy and it must be suited to the person, but we are all capable.

So, to me, inspiration comes from the ability to listen to someone.

This Blog was written by Ava Goldson based on the interview with Tales to Inspire.

EXTREME CHALLENGES | MENTAL HEALTH | YOUNG PEOPLE
Manage Cookie Consent
To provide the best experiences, we use technologies like cookies to store and/or access device information. Consenting to these technologies will allow us to process data such as browsing behaviour or unique IDs on this site. Not consenting or withdrawing consent, may adversely affect certain features and functions.
Manage options Manage services Manage vendors Read more about these purposes
View preferences
{title} {title} {title}
Skip to content