My name is Jenny and I was born in Kinshasa, the capital of the Democratic Republic of Congo. I am currently seeking asylum in the UK – a state of limbo I have been in for 14 years.

I grew up in a large family, 9 of us in total, with my father the sole breadwinner working as a politician. As if this wasn’t enough, he also supported my extended family under the same roof.

This left us extremely vulnerable and sadly, my father died when I was 12 years old. As happens all too frequently in the DRC, he was imprisoned and poisoned for challenging the corruption of the government – just one of the methods used to keep its stranglehold on power. Whilst I was too young at the time to understand, the pain and sadness burned inside. 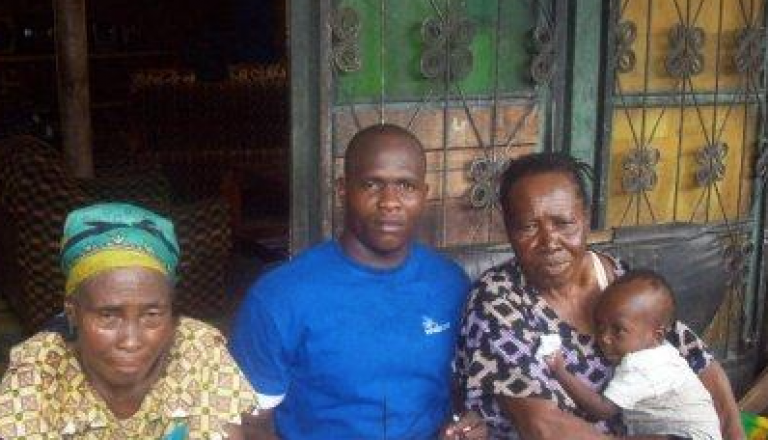 As a strict Christian, my mother did not want to remarry but according to the custom in the DRC, her husband’s younger brother claimed his “right” to marry her. When my mother refused, he beat her and cast her and the rest of our family out into the street. She died not long after and I was left alone with my siblings at the age of 14. I took responsibility for everyone by dropping out of school and earning money doing jobs in the market. In my spare time, I would study law and politics as these were the things I felt would help stop such injustices!

Fuelled by my grief and with little left to lose, I became an activist to stand up for my people. I was born into a dictatorship, one where President Mobutu spent 32 years in unchecked power. No law, no constitution, no parliament, no government, nothing. I was young, but I read a lot and I saw the way other countries had freedom and the right to protest. The DRC has vast reserves of minerals and natural resources but also the poorest people in the world. How is that even possible? I needed to play my part in ending the suffering. As many as 10 million people have died in recent memory in the DRC due to war, for speaking their mind and opposing autocracy. How can it be that this number is roughly the same as the Holocaust and yet it barely scratches the surface of the world’s conscience?

I joined a political group, Movement for the Liberation of the Congo and this brought some serious challenges for me personally. I was arrested over 20 times. In prison in the DRC, you do not get fed. Your family is expected to bring food and medicine. After a rally against the then-President Joseph Kabila in 2006, I had to go into hiding as police searched for me door-to-door. My friends who had joined the protest had been arrested and I knew that if I got caught this time, I would have been killed like my father before me.

With my life in grave danger, my only option was to flee the country and leave my four beautiful children behind. I sought assistance from a priest who organised a false passport and even bought me a plane ticket. I arrived at Heathrow Airport in 2006 and even though I spoke no English and had no friends, housing or money, I was alive.

I told Border Control I was an asylum seeker and they led me to a room where I waited for six hours for an interview. After midnight, an officer came in with an interpreter and the interrogation began.

The interrogator then left and I waited hours for his return. He never came back and instead a kind female officer walked in and apologised for her colleague’s behaviour. After 34 hours of stress – I was told that I would be allowed to stay in the United Kingdom temporarily.

I immediately filed the papers given to me by the Home Office and handed in all the relevant documents. Subsequently, my papers were lost and it transpired that the authorities had no record of me ever entering the country. From this point, I became homeless in a strange foreign land.

Since 2006 I have been homeless on and off for 6 years. I have lived on the streets of Bradford, London, Manchester, Peterborough and Sheffield to name just a few. I spend most of my days in the library using the internet to study and to try and help others in the DRC. I spend some nights in a 24-hour McDonalds to use the WiFi. I was given an old laptop by an extremely generous gentleman and have since been able to manage a network of 65 Congolese activists who pass along documents of human rights abuses in the DRC.

Most recently my file for refugee status was rejected, however, the UK government believe it is too dangerous for me to return home. As I do not have a right to work in the UK and cannot leave the country, I have fallen between the cracks of the system. Thankfully, there are people willing to help. An amazing organisation called RAPAR have found temporary accommodation for me which has been a huge relief.

My journey to this point has not been an easy one and my mental health has been a constant battle as a result. I often feel down and depressed, despairing at the state of the world and my plight, feeling helpless at being unable to make a difference or effect change and, of course, the bitterness of missing my family in the 14 years we have been apart.

In the dark times, I try to think of the organisations that have helped me and the forces for good in the world. I cannot thank these organisations enough: Mustard Tree, The Red Cross, BRASS, DASH, Refugee Action in Bradford and the Archer Project to name a few.

Whilst I have not yet found my happy ending, I hope my story raises awareness of the suffering endured by others every day and helps us understand that ultimately we humans all share a small rock in outer space. Pain is no less real because things like this always happen in Africa and we have a responsibility to speak up and reach down to lift people out of their misery.

The hearing to determine my right to remain in this country was scheduled for 20 March 2020, but the court date was cancelled due to COVID-19. I am still waiting patiently for a new appointment, desperate to turn a new page of my life, to give back and show my appreciation for the people who have helped me here in the UK. This country saved my life and for that I am eternally grateful.

To anyone reading this is in a difficult situation like me, you must trust yourself, work hard and never give up. Help will come when you least expect it and organisations are out there that care about you.

To everyone else, ordinary people in Britain and around the world, do not leave it to anybody else. You have the power to save lives and spread joy and it feels amazing. We have a world of news and information at our fingertips, so please do not bury your heads in the sand and ignore suffering around you. Ordinary people saved my life and you can make that difference too. If I have managed to inspire anybody, please reach out. I am more than happy to connect you to vulnerable people in the DRC and elsewhere – there is much work to be done.

ADVENTURE | EXTREME CHALLENGES | MENTAL HEALTH | SPORTS
Manage Cookie Consent
To provide the best experiences, we use technologies like cookies to store and/or access device information. Consenting to these technologies will allow us to process data such as browsing behaviour or unique IDs on this site. Not consenting or withdrawing consent, may adversely affect certain features and functions.
Manage options Manage services Manage vendors Read more about these purposes
View preferences
{title} {title} {title}
Skip to content