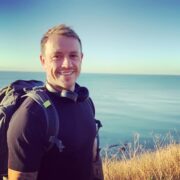 Alcohol turned me into a completely different person. It was self-medication for my social anxiety. It got to the point where I would need to have a drink to be able to hold a conversation with my own family!

I grew up in Preston on a council estate, living a relatively normal childhood. I was academic, so managed to get into a good local school where I was top of the class and captain of the football team until the age of 13/14 where things started to go downhill. Now, looking back following my recovery, I can see that as a shy young man an incident where I was passed a note in History from my ‘friends’ that said they no longer wanted to hang out with me, knocked me sideways. As someone who already felt like an outsider, I became really isolated.

At 14 I was first introduced to alcohol. It felt amazing. I went from being anxious to immediately full of confidence, but straight away this went to an extreme where I drank so much, I ended up being taken home by the police. Things spiralled out of control from there, by hanging out with gang members outside of school that were older than me, I ended up dealing drugs and becoming associated with violence on the local council estate.

By 21 I had an apprenticeship spraying cars, however I realised that the guys I was socialising with wasn’t for me, so gravitated towards my brother and his friendship group. For the next 5 years or so, I had a normal working life during the week and would then spend the weekend with the lads having a drink watching sport. By the age of 26 I was diagnosed with chronic pelvic pain syndrome, which is still relatively unknown and impacts the male sensitive area in a painful way. I took copious amounts of medication to mask the pain but never treated the underlying issue.

I got made redundant from my job, so I decided to start a law degree. This meant I had a mortgage, relying heavily on drugs for my pain, excessively drinking every night and financed by a cash in hand income. I would be in the library every morning grafting to learn about the degree, and that work ethic meant I came second in my class out of 350 students winning some awards, however during the summer periods I really struggled. In between terms the lack of structure and focus meant that my drinking consumption accelerated. During the year 2 summer break, I moved out from my brothers flat due to a fight, no longer spoke to my friends and turned drinking into a 24/7 necessity. The only person who I could speak to at the time was my mother, who was struggling with alcoholism herself. I can remember thinking “it will be alright; I can snap out of it when I need to”.

One of the things I did have going for me was the fact I could admit I needed help, so I went to my dad and said how worried I was about missing my degree (the one thing I was excelling at). Fortunately, he was financially in a place to put me into a 10-day medical detox facility. After 3 or 4 days I felt great! I was running every day and had a new positive outlook, under the impression that I was cured.

I went 6 months without drinking, finished my degree, however slowly after a few “social” drinks, it crept right back into my life, but this time worse. I was in a very turbulent relationship during this period, where it got so bad that I chased her to London to try and win her back.

I had already lost a job in Preston at a law firm with good career prospects because I couldn’t last two weeks in the office before people realised that I had a drink problem. Job number 2, I lasted 4/5 weeks in London because following a bender with my boss, I was still drunk on the Monday morning. Job 3, I remember having the mentality that because I was so anxious, I have to at least have a drink for the first few days to build my confidence and then I would ween myself off. I can remember week 2 withdrawing off the alcohol, sweating and shaking during presentations but I managed to stick at it. I threw myself into exercise and didn’t drink for 5 weeks and work was going well! Until one night when a party on top of St Pauls Cathedral sent me over the edge. I was already nervous about the event and decided “I have worked hard and done well for the last 5 weeks so I can have a drink”.  The rest is a blackout!

I was out of control. I had been rude and aggressive to the CEO, almost got into a fight and the shame of this happening again meant I went back to my flat and decided never to return to my job. I was blackout drunk sending emails to work colleagues whilst claiming to be ‘unwell’ drinking 24/7. I stopped showering, eating and looking after myself. I was drinking myself to hospitalisation or worse!

Having been rescued from London by my dad and brother, I went home and was lucky enough to get a place in rehab at the Priory. I knew this time I was going to listen and learn, and there was no denial that I could not control myself with alcohol. I was there for 28 days and using my studious nature I threw myself into the process trying to understand as much as possible. I can remember opening a letter from my family in a group therapy class. I was an absolute mess reading it. I really got it this time.

Once I left the program I continued with the aftercare, not just AA but also yoga and meditation, developing myself as a person which led to a new career in IT. I finally began to control my natural anxiety and started to ‘live’ for the first time. I wanted to give back something constructive, so I worked as a peer mentor at the Priory, answered the helplines for AA at weekends and completed a Masters degree at Buckingham University, which cumulated in me creating my own rehabilitation program.

I found through my degree research that a lot of people don’t engage with AA because of the religious elements (not that it isn’t an amazing organisation!). Therefore, I wanted to develop a new option that would take a more holistic approach instead of spiritual.  Making Changes, uses the framework of the 12 steps in AA but in a modern structure focused on mindfulness and meditation. These guidelines come from a variety of sources to help people develop love, kindness and a strategy to help eliminate many of the causes for relapse.

I have been sober 7 years and I have never been so happy and grateful! I feel so lucky to have a decent job that can fund my research and develop the program that will use my experience to help other people!

Showing you that you can be your own inspiration