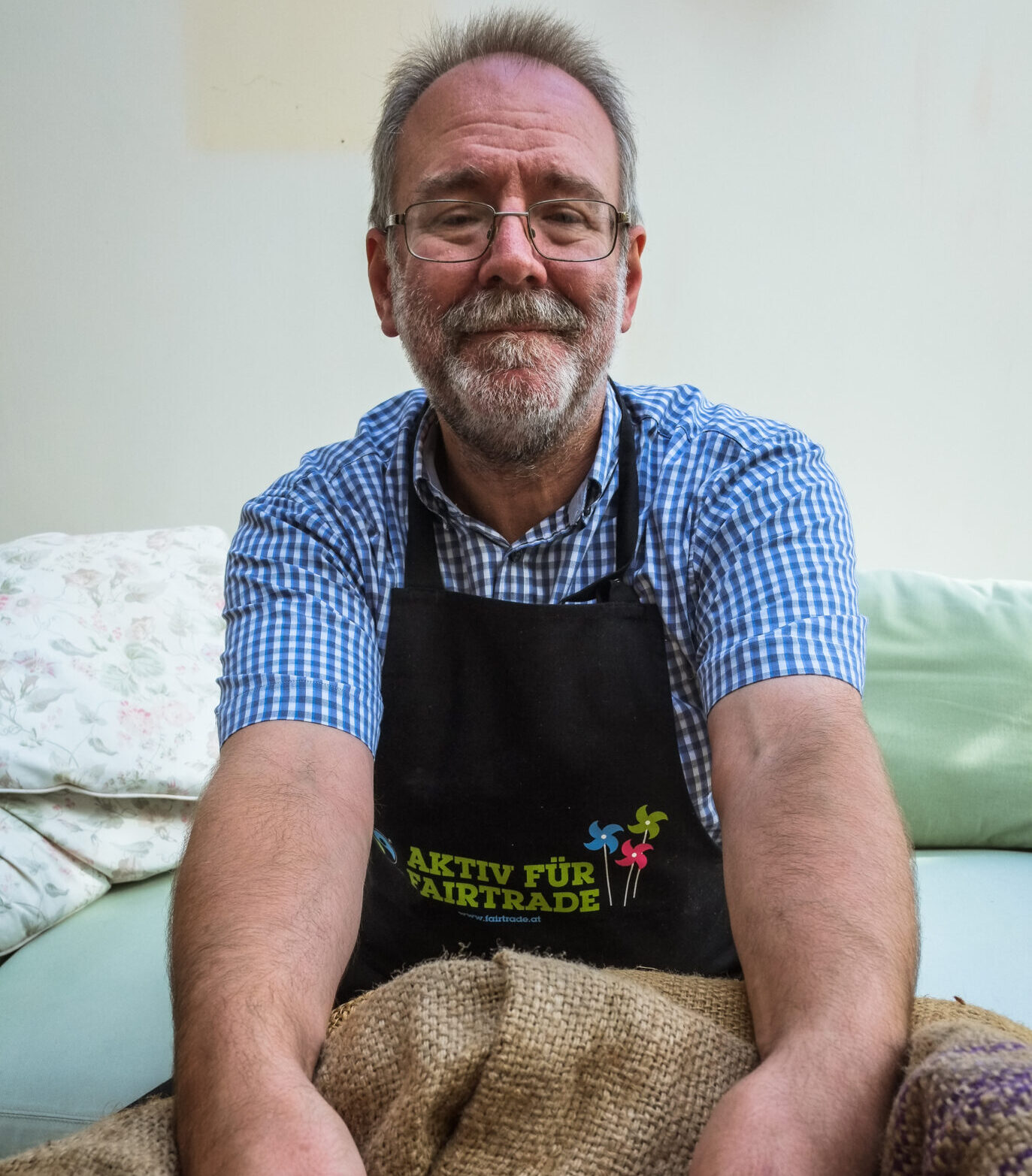 “If you bang your head against a brick wall long enough it will fall, but it may give you a serious headache”

My name is Bruce Crowther and I am the founder of the Fair Trade Town Movement and I have also received an MBE for my services to Fairtrade and Oxfam.

Interestingly, however, my journey began on a different path. After completing my education in the North West, I ended up qualifying as a vet. This was not a job that I had a long-held passion for, but one that I found myself in after having an interesting chat at a careers fair. Whilst I appreciate the skills and expertise that I gained from working as a vet, looking back now, I can tell that this was not the right route for me.

After I qualified as a vet in 1985, I gained my first exposure to Oxfam and international development. This area was gradually increasing in awareness, given the Ethiopian famine and the release of the Band Aid single, ‘Do they Know it’s Christmas?’. As I learned more, I found it increasingly hard to accept the injustice around global inequality. How can it be possible that one child dies every three seconds, as a result of living in poverty? More striking to me, however, is that this is manmade. Even now, I struggle to comprehend the injustice which this statistic represents. This injustice is what drives me to strive for change. While my wife is naturally more caring, I just think that people are awful. In fact, I despair when I look at humanity and the greed which is all around us. I think that more people than not are driven by greed and power and even accepting this has caused me notable depression.

When I first attempted to bring Fairtrade into the community, I was relatively unsuccessful. Me and a few others bought fair trade coffee and tea for all the churches in the area, from our own money. We started with five churches and branched out to include a Quaker house. At this stage, I knew almost nothing about Quakers and I gradually learned that more and more of the things that I respected were linked to Quaker beliefs. The Quakers, for example, played a large role in the abolition of slavery and hosted individuals such as Gandhi at their meetings. Despite this, they were far from boastful and this really stood out for me. I think that is much more important to practice the words of Christ than to just hear them. Having now become a Quaker myself, I can say with certainty that we do not have problems with other faiths. Personally, for example, I have spoken at a mosque in Ghana. In essence, God does not care what flag you wear. As Gandhi said, ‘just because I do not believe that Jesus is the son of God, why should I be denied his teaching?’

Following this, Oxfam grew gradually larger in the 1990’s and the Fairtrade mark came out of this. Still, even at this point, only three out of six religious houses in the town used fair trade. Again, I found this really hard to comprehend. Despite this, we adopted a different approach and invited local churches, schools and businesses to attend a three course meal. This was completely free and there were no collection boxes. We simply wanted to increase awareness around Fairtrade and encourage people to pursue this option. From this event, almost everyone committed to using Fairtrade, in effect creating a Fairtrade town. In fact, when it was decided at a council meeting that Garstang (the town) was the world’s first Fairtrade town, it was almost like it happened by accident. Despite this commitment, it took the Fairtrade organisation around 18 months to recognise that this was something to celebrate and they officially gave recognition to the Town’s accolade. From this, there were also five requirements that were established to create a Fairtrade town, which has now been adopted for towns across more than 30 countries. The motivation behind encouraging Fairtrade towns is not aimed at boycotting other goods, but promoting Fair Trade products. Other choices can still exist, it is just that a Fairtrade town implements that choice.

After this, things completely blew up and the growth was amazing. For example, I was phoned by an Australian Broadcasting Company who were interested in the story, despite not knowing what fair trade was. It was at this point that I realised that Garstang could be used as a great marketing campaign.

Following this, we also launched various initiatives in 2000. For example, we took a group of children to Ghana to help educate them around Fairtrade. Alongside this, we launched a project called Fairtrade Slavetrade which drew awareness to the local history and its links to the slave trade. This project inspired me to learn more about the movement for the abolition of slavery. Overall, I felt that this was a continuation of the movement for abolition. As Mandela said, we can be freed from slavery, whilst still having the chains of injustice.

Given the growth of Fairtrade, I found myself doing more and more work in this area and, subsequently, spent less time being a vet. I was fortunate enough to have international placements in places like Japan and it became increasingly unsustainable to have to continuously take holiday. Then, in 2011, I was approached about the idea of an international museum to promote the campaigns against injustice through history. In turn, creating something of an International Fairtrade Museum. We did this through the creation of the Fig Tree, which coincided with me losing my job as a vet and working for the Fairtrade foundation. The Fig Tree Foundation focuses on offering workshops in schools, while also hosting museums and cafes. After losing our premises for a second time, I took it as a sign from God that this was not needed. Instead, we have continued to deliver workshops in schools and acted to support the international Fairtrade movement.

Despite setting up the foundation, I have never seen myself as a leader or a pioneer. I have never had, nor wanted power. In fact, I have always believed that if you want power then you are often the worst place to have it. Look at Gandhi, for example, power is best used when it is placed upon someone, not because they have sought it. In my own life, I never saw these initiatives as choices, instead I was driven by God to do these things. I had to do it simply because it was the right thing to do.

Moving forward, I hope that my book can capture much of this journey and highlight the ups and downs in my experience with Fairtrade and the fight against injustice.

Not in My Life Time – A Fair Trade Campaigner’s Journal