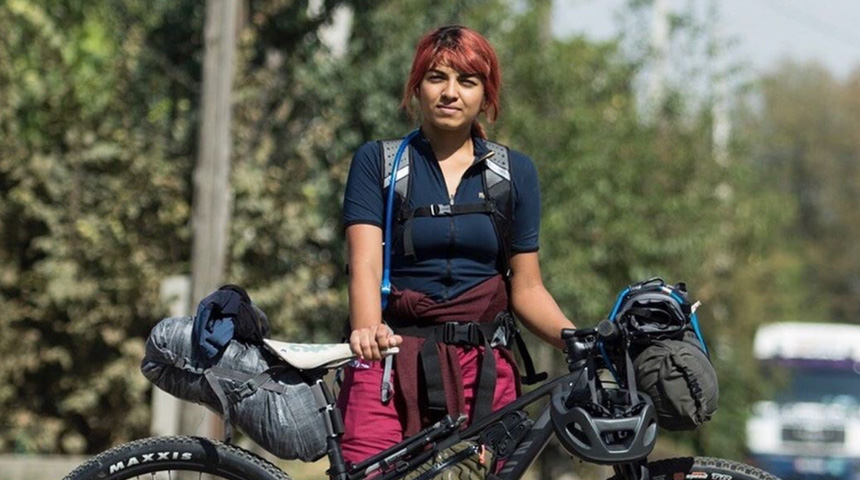 My name is Vedangi Kulkarni, I was born and raised in Pune, India.

Growing up I loved playing football and writing, I wanted to be a professional in both.My parents loved to travel, they took me everywhere with them and encouraged me to plan trips with them, it was so cool to be given so much responsibility at a young age.

When I was 16 I started playing as a professional goalkeeper for Pune FC.I also started my writing journey with a novel about a girl who travelled the world.

When I was 17 I went on an amazing bike trip in the Himalayas. I was keeping up with the group leaders and I wasn’t even tired, the group leader told me I had it in me to do the longer distance rides. I decided I wanted to be out on my bike more instead of on the pitch, so I quit football shortly after. I signed up to do a 900 km bike ride with a team, but I was under 18 so they wouldn’t accept me.

I wasn’t going to be held back by this and decided to do it on my own.

It was a tough ride with very steep passes and bad conditions, not to mention the altitude, but I completed it in 20 days. At 18, I had planned to move to the UK for university to study sports management, but I fell and hit my head the day before my final exam, and I didn’t make the grades. Undeterred by this, I wrote directly to the head of the university requesting an appeal. I really sold myself to her and she was super impressed, she offered me a scholarship and I moved to the UK in September of 2016. It was a culture shock, I found it really hard to make friends and I was completely alone in a brand new country.

I joined the cycling club, and we did a group ride, but I didn’t really enjoy this. I then signed up for a 400km ride down south, but at around 100km my valve had broken. I was trying to fix it when a lady invited me inside for a cup of tea. I told her about my journey in the Himalayas and she was amazed.

Then her husband asked me about my route, I don’t know what possessed me, but I said I was going to John O’ Groats. He took me to Halfords to fix my bike and the next day, Instead of completing the ride down south, I headed north. I was so unprepared, but some amazing families took me in Bentley, in Rivington and in Scotland.

Whilst riding I was reading a book by Julianna Burring, the first woman to circumnavigate the globe on a bike. I felt like I could resonate with her, after all I had  just ridden 6,000 miles in a different country without knowing anybody.

It dawned on me that I needed another challenge.

I wanted to be the fastest and youngest woman to cycle around the world.

My start and finish line was Perth, Australia and I crossed through; New Zealand, Canada,  Iceland, Portugal, Spain, France, Germany, Belgium, Sweden, Finland, Russia and India. I faced so many challenges;  from organising visas, to contracting stomach bugs and lung infections. I also got myself into some pretty dangerous spots. I was riding in Canada and noticed a group of grizzly bears right by the road. The male bear stood up on its feet and chased me! I rode really hard up this hill for my life, but bears run at about 60 mph and because I was riding up a hill I stood no chance.

I crossed to the other side of the road and a big black lorry had to slam on its brakes stopping inches away from me. I carried on riding until I got to civilization at the end of the national park,  and locked myself in the toilet.

I was going to give up, I wanted to bear proof that toilet and never come back out again. It was the scariest thing that had ever happened to me, or so I thought. I was however determined to finish the challenge so I continued riding.

I was riding in Spain one evening and I noticed two people on a motorbike who kept coming close to me and then stopping.

After about an hour of this they pushed me off my bike and held me at knife point, they took all my stuff, including my hydration pack which I needed to survive. They pushed me and my bike off the road and I fell head first into a ditch, I was unconscious for a few hours. When I regained consciousness I pushed my bike up the hill and collected my things. I had a concussion and I didn’t know where I was, or what I was doing. I managed to find a petrol station and the guy running it got me to a hospital. They told me I needed to rest, and not to ride.

But I wanted to carry on, two days later and I was back in the saddle. Afterwards, I was nowhere near as strong, and really scared on the bike. But I never questioned giving up.

I made it into Russia and emailed a hotel asking to stay for free in exchange for me telling my story, when I got there all the staff were waiting and clapping at the gate with flowers. It was beautiful, I reached out to someone and they gave me so much more than what I asked for. It was the boost I needed.

I made it to the finish line, and although I wasn’t the fastest woman to ride around the world.  I was the youngest. In the end I was just grateful to be alive.

Afterwards, I went back to India and did talks at universities and schools. I then went back to the UK to complete my degree.

However, I soon realised that university wasn’t for me. I quit university in 2019 and started my own business, helping other people plan their adventures.

It’s going really well and I love my job. I want to inspire others to take a leap of faith and make their dreams a reality.

ENTREPRENEUR | EXTREME CHALLENGES
Manage Cookie Consent
To provide the best experiences, we use technologies like cookies to store and/or access device information. Consenting to these technologies will allow us to process data such as browsing behaviour or unique IDs on this site. Not consenting or withdrawing consent, may adversely affect certain features and functions.
Manage options Manage services Manage vendors Read more about these purposes
View preferences
{title} {title} {title}
Skip to content