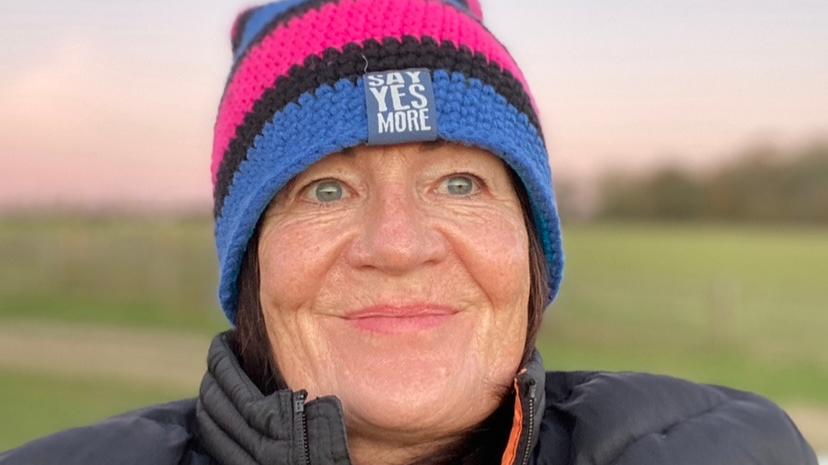 “I feel like I’m on the edge of the cliff and I’m ready to jump and I’m excited, I don’t know what’s going to happen but I’m there, it’s too late for me to crawl back.”

I’m Siobhan Daniels, I’m 63 years of age. I worked for the BBC for thirty years, 10 years in radio and 20 years in television. I retired three years ago. I got rid of my flat and all my possessions. I bought myself a motorhome and hit the road. I’ve spent the last 3 years travelling Great Britain, championing positive ageing, and challenging ageist stereotypes and having a ball!

I’m from a family of eight children. My father was quite a strict, disciplinarian Irish catholic. We did get beaten and locked in cellars. While there were good things about my childhood, there were hard times that have reared their ugly head throughout my life. I left home when I was 16, it was the first time facing my fears and overcoming them. I had to find a job, a home and feed myself. I got a job as a dental nurse during the day and at a pizzeria at night and I got a bedsit. Knowing how scared I was when leaving home and then achieving this, was phenomenal really. I realised that being faced with adversity is an opportunity.

I have never had time to dream, the more I have looked back into my life now, the more I realise that I have always been in survival mode. Before leaving home, I got 8 O Levels. Then, I became a nurse for nine years. I then got pregnant with my daughter, so my life trajectory changed. I didn’t plan for motherhood. My relationship split up when I was 4 and I became a single mum. At that time, I did my typing exams, and I got a job at the local BBC radio station two days a week, just answering phone calls. I have to say I was rubbish doing it. There, I overheard an advertisement that came up for the BBC training reporter scheme, 7500 applied with 26 places available and I got one of them! So, now, I could take this risk or continue being a nurse. Luckily, I had support from family and friends. I did it and became a journalist for 10 years, travelled around the country and had my own programme.

The path of mortgages and buying lots of things wasn’t fundamentally me. However, I felt it was my duty to my daughter and I wanted to do it! I loved seeing my daughter flourishing doing lots of brilliant things. At 49, I took a gap year from the BBC. I bought an around the world ticket. I did it on a budget, I stayed in the cheap hostels because I wanted to connect with people. I remember feeling ageless and I knew that this was what it would be like when I retired. I remember talking to one young guy about bullying at work and feeling afraid. He looked in my eyes and said gently, ‘you’re only as afraid as you allow yourself to feel’ , a salient lesson for me in situations when I feel afraid. A big problem getting started on adventures is self-limitation, an awful lot of women say, “I can’t do it!” when I give my talks. My advice is to write in a book a list of what you want to do, what’s stopping you from doing it and then write down what you think you need to do to overcome these obstacles and put the book away for a few weeks. Your mind works on these ideas subconsciously over this time. Your adventure doesn’t have to be as extreme as mine. I’m being extreme to try and be a trailblazer to show it can be done. We do have a voice and we are not invisible.

I don’t examine the possibilities of what can go wrong, my brain isn’t wired that way. Just before I retired, a new boss at the BBC said they would like me to stay on for another year, I would get put back on screen doing reporting. I went home excited and thought about it over the weekend. I said to my boss on the Monday, “I feel like I’m on the edge of the cliff and I’m ready to jump and I’m really excited, I don’t know what’s going to happen but I’m there, it’s too late for me to crawl back so I’m not going to stay.”

He said he was disappointed, but I was ready to jump, so I jumped.

Working in TV and media, I had issues with the older female representation. The images used to convey messages about us are offensive! We are reduced to body parts. Just before I was 60, I climbed the highest mountain in Malawi; I was running marathons in my mid-50’s. Media does not understand the ageing process. I would sit in news meetings and hear discussions about older people, it was like I was voiceless. Their descriptions didn’t reflect my friendship group at all.

I am going to challenge this when I can now. I had to be impartial before, so I waited until I was retired. Women are treated badly from their mid-50s onwards, a lot of women feel underutilised, bullied on bases of ageism. Young people need to change the narrative around ageing. There needs to be legislation in place to protect you when you are 50+. Let’s be pro-ageing, let’s enhance ageing, flip the narrative on its head so we are not all fearful of being old!

I had a particularly bad day at work in my mid-50’s, feeling broken, bullied, and bereaved. I needed to find an escape route. I felt like I was pretending so I could survive, and I wasn’t fulfilled. So, I started writing my lists of what I wanted to do, and I came up with this adventure that I’m on right now. I was becoming disenchanted by the idea of working hard for lots of money. I think it gets in the way of real human connection. I wanted to show that you can live on very little.

I have learnt through everything that most people want to be more kind, but most people just need a break. I got a break when a journalist from the guardian saw my Instagram and they wrote my column, I was contacted by a literary agent. It goes on presale this month – Retirement Rebel.

I don’t know whether someone creates their own luck. I have just tried to be authentic.

The book is about my life’s adventure, what makes me who I am, the fears and the drives. It’s for young women to stop fearing being old and for old women to stop self-limiting. And a book for men to understand the women in their lives. Their wives, daughters and sisters have compromised an awful lot to bring up their children and they may be feeling a need for an adventure. We are in ‘elderhood’ longer than we were in childhood, so we need to make the most of it! Women just want that self-fulfilment.