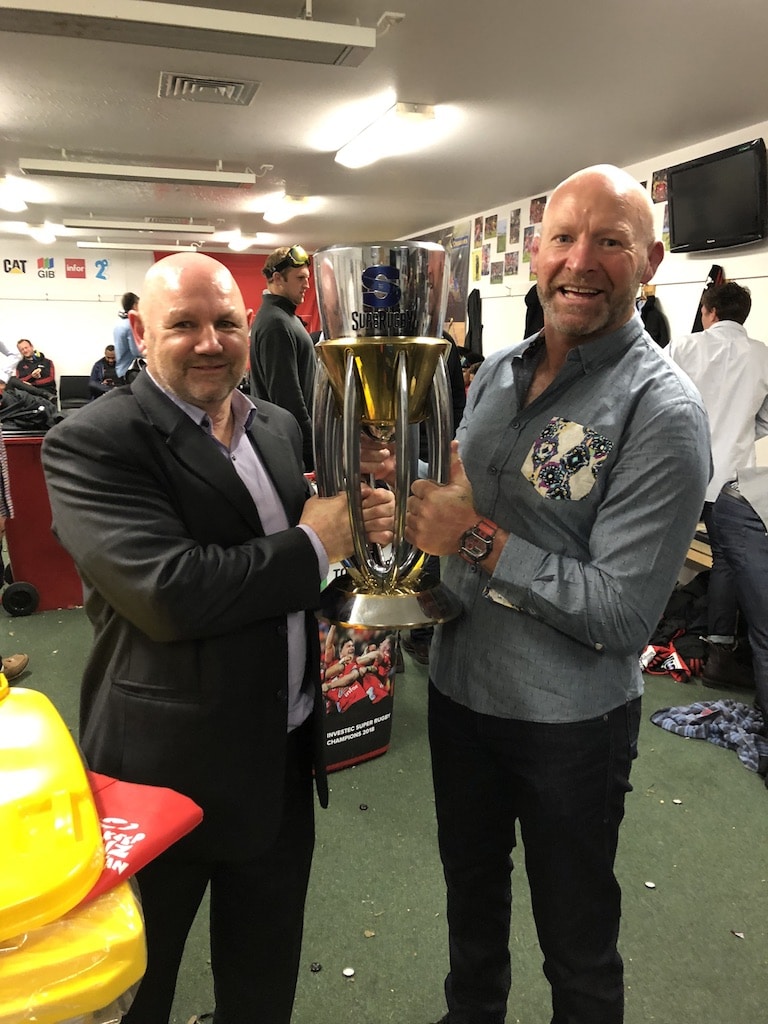 “Leaders aren’t as important as leadership”

My name is Shane Fletcher and I am a manager of one of the most successful rugby teams in the world, the Crusaders.

I have local roots, given that I live in Christchurch and grew up in a small nearby coastal town. This had a small population and, as such, there was a close community. This togetherness is something that I enjoyed growing up and have continued to enjoy as part of the Crusaders.

I always enjoyed sports growing up and I was particularly involved with the school teams. Aside from my love for sport, this allowed me to spend more time with my Dad, as he helped to coach the local rugby team. He was an extremely hard worker, so this was often where I saw him most. Although this was sometimes difficult, I was always inspired by how hard he worked and that encouraged me to follow in his footsteps working on the farm. This also combined my love for growing things and going hunting.

Following these initial dreams, I went on to secure a Diploma in Agriculture. Building on this, I wanted to earn more money so I learned how to shear sheep. Although the extra money was great, this was a physically hard job. Often, I would get to the end of the day feeling completely knackered and it sometimes felt like I had not achieved enough that day. The payment for this job was dependent upon the number of sheep sheared, so as I improved, I gradually received more money.

Following some advice from a friend, I then moved on to train as a teacher by spending 3 years in teachers college. This was an informative experience, as I was working in an area with a high rate of unemployment and a high rate of crime. Of course this naturally came with challenges, but this also brought lots of special memories.

My career then took another turn as I spent time in Louisiana and then the UK before travelling back to New Zealand and getting more involved in rugby.

However, I then got my first real experience working full time in professional rugby. This was a big decision, as I had been a school principal for nine years but ultimately the opportunity to work for the Crusaders was not one that I could turn down. Of course, I miss teaching and I miss watching the development amongst my students. However, the school recognised the prestige of the opportunity and encouraged me to take the job. Education is focused on bettering yourself and for me, this opportunity was a chance to better myself. That being said, my love for teaching will likely see me return to the profession in the future.

As mentioned, I had experience being involved with rugby teams before but this was a completely different environment. This was an opportunity to work with leading professionals like Dan Carter. Being part of the Crusaders has really emphasised the importance of creating a team environment where no-one feels isolated. Of course, there is a competitive environment but we try to use this for collective improvement.

We have had great success and in the five years that I have been at the club, we have won the title every year. For us, it is important that we are subtly improving each year and offering a different challenge to our opponents. The focus is on becoming a master craftsman and creating a legacy. Each year, we have tried to use a different vision. For example, when we were trying to achieve our third consecutive title, we looked at the achievements of Usain Bolt and the attitude that he had in winning 3 consecutive Olympics.

My role is centred around the general nutrition and wellbeing of the team. I make sure that everyone is fed and clothed. It is also my responsibility to help facilitate sponsors and sort travel and accommodation for away games. Overall, I aim to try and support the players because athletes perform best with proper support. Additionally, when one member of the team feels cared for, this is often reciprocated and helps to create a supportive environment.

In comparison, I was quite shocked by my experience in football academies in the UK. Here, there is a focus on contracting players from a young age and subsequently creating large amounts of pressure. Often, however, when a player is released, there is minimal support. I think that we should be viewing development as more than just an ability to perform.

Overall, I love the work that I do and I don’t think that I could ever go back to working by myself again. I think one of the best things about my role is the authenticity that it brings. Don’t get me wrong, I love the crusaders but I would also relish the opportunity to one day be able to work for the national team.

Although I don’t know fully what the future holds, I know that I will be doing something interesting that I enjoy. Every moment is important and I try to capture opportunities as they come. I also want to see change as an exciting opportunity and not fear the unknown.

“If I am trying to find someone to blame, I am taking away time to find a solution.”

Keep Your Boots On

Using adventure to transform my life

ADVENTURE | MENTAL HEALTH | SUSTAINABILITY
Manage Cookie Consent
To provide the best experiences, we use technologies like cookies to store and/or access device information. Consenting to these technologies will allow us to process data such as browsing behaviour or unique IDs on this site. Not consenting or withdrawing consent, may adversely affect certain features and functions.
Manage options Manage services Manage vendors Read more about these purposes
View preferences
{title} {title} {title}
Skip to content