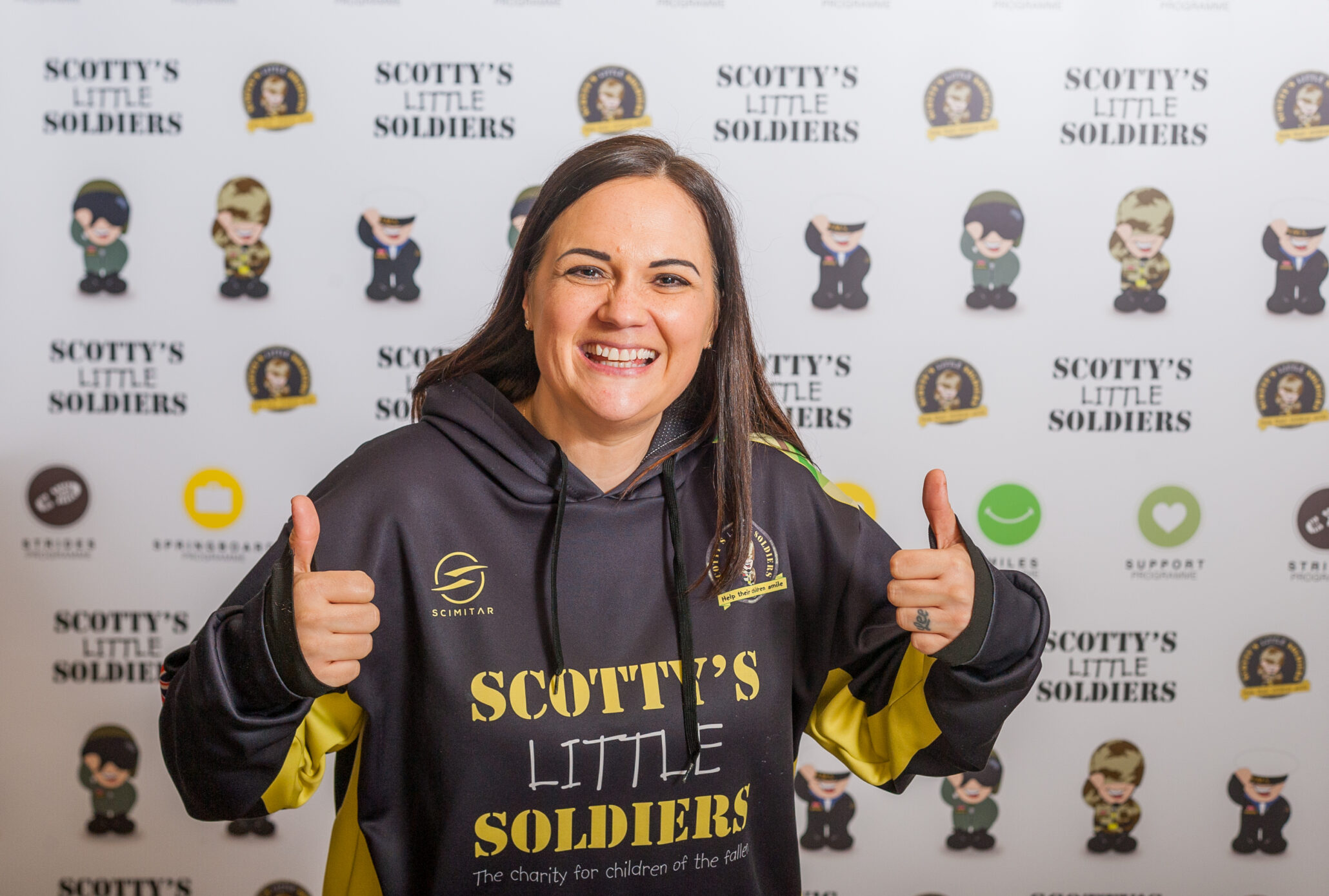 You Can get through the Darkest Times

“You never get over somebody dying, but there are ways to make sure their memory lives on.”

My name is Nikki Scott and I am the founder of Scotty’s Little Soldiers. Based in Norfolk, we are a charity aimed at supporting bereaved children and families, who have lost loved ones serving in the military.

To understand how all of this started, it is worth taking a trip down memory lane. My story began with a loving childhood. Originally, I thought about working with children with special needs, building on my time reading Childcare Studies at university.

However, after getting drunk one night at university, I ended up landing myself a job at the local pub. In contrast to my brother, I was not following a strict career path and, instead, just doing things that I enjoyed. Eventually, I managed to move up to assistant manager and I was really enjoying how things were going.

While I was working at the bar, there was always a cheeky guy called Lee who would come in and ask me out. Thinking that he was too immature, I always turned down the offer but we always got on like a house on fire. As such, it was a welcome surprise when Lee ended up working at the pub. An even bigger surprise came when he told me he was leaving for the army. Of course, this was his passion and I was happy for him carrying out his dreams and even with the time apart, we always stayed in touch.

I think that I only realised my true feelings for Lee when my Mum turned around and asked why I was talking about him so much. Eventually we started dating and things kept progressing until we were married and had kids. After marrying in 2008, I left the pub scene and we moved to Wiltshire. Lee had spent tours in Iraq and Kosovo and was due to go to Afghanistan. Naturally, this was a tough time. Brook, our second child, was only 6-months old at the time and it was incredibly tough, for both of us, to see him go. Despite these difficulties, I recognised that this was his passion and this is what he wanted to do.

In the first 6 weeks of the tour, I was glued to my friends. After all, many of us had partners who had gone away. We all knew the risks but I do not think that I ever considered that it would actually be Lee. Then, in 2009, the news came that Lee had been killed on duty and all my worst nightmares suddenly became true. It was just so hard to accept that I would never see him again. My next thought was panic around the need to tell Kai our first child, who was just five-years-old at the time. Undoubtedly, this was the hardest thing that I ever had to do.

I never spoke to Lee about the possibility of this day coming. I did not know what he wanted for the funeral, as it was a topic that we generally avoided. I was in a really bad place and I am so thankful for my mum, who took six weeks off of work to help with the kids.

I felt Lee’s absence for everything. I wanted his advice around big decisions. Aside from this, I just felt grief for Lee. He was only 26 and would never have wanted things to end the way that they did. Lee was also the fun parent and I felt lost trying to navigate life without him. It was a long road to reach the point where I am now.

Kai never really understood at the time. We knew that there was something wrong, but it was only later when the Autism diagnosis came. I think for Kai, it was very hard to understand what was right and wrong. Generally, as they get older, I give the children more detail but it is naturally hard to talk about. In fact, even being able to talk about it at all, shows some healing.

I knew that I was not being myself. Instead, I had given up on living and decided to continue purely for my kids. Then, around nine months later, my cousin Jo forced me to go on holiday with her. Without sounding cliché, this was the best thing to ever happen to me. When I saw Kai playing with his cousins, it was like a light-bulb moment. I knew that I had to sort myself out. After all, Lee would want me to be happy.

It was at this point, I knew that I wanted to start a charity. After speaking with other widows, it seemed like there was a gap in support for bereaved children and I wanted to work for change. My family and friends backed me 100% and, from there, Scotty’s Little Soldiers was born. Everything about the charity comes back to Lee. Scotty was Lee’s nickname in the army and the untied shoelaces represent his sometimes scruffy appearance.

At the start, there was a huge effort on raising lots of money and completing the procedural tasks, such as registering the charity. With Afghanistan still at the forefront of people’s mind, we received so much support. This was also an experience that helped me to create a tight bond with my brother.

Of course, there is always more that can be done but from where we started, we have come such a long way. We have six holiday homes and run four programmes, which aim to fill the gaps in the existing support. Part of the goals of the charity is recognising that grief is a journey and that support is needed in the long-term.

The programmes themselves offer a range of support. The smile programme, for example, is focused on making children smile, through holidays and vouchers etc. In comparison, we also offer programmes for bereavement and coping.

In the future, we will always stick to remembering why the charity was started and what we are doing it for. The experience has also helped me to move forwards. Life still goes on and I have remarried and had two more kids.

I love what I do and even though I have rubbish days, sometimes, I want to continue to grow the charity and reach as many people as possible.

Standing up For Human Rights

ENTREPRENEUR | MENTAL HEALTH | SURVIVOR
Manage Cookie Consent
To provide the best experiences, we use technologies like cookies to store and/or access device information. Consenting to these technologies will allow us to process data such as browsing behaviour or unique IDs on this site. Not consenting or withdrawing consent, may adversely affect certain features and functions.
Manage options Manage services Manage vendors Read more about these purposes
View preferences
{title} {title} {title}
Skip to content