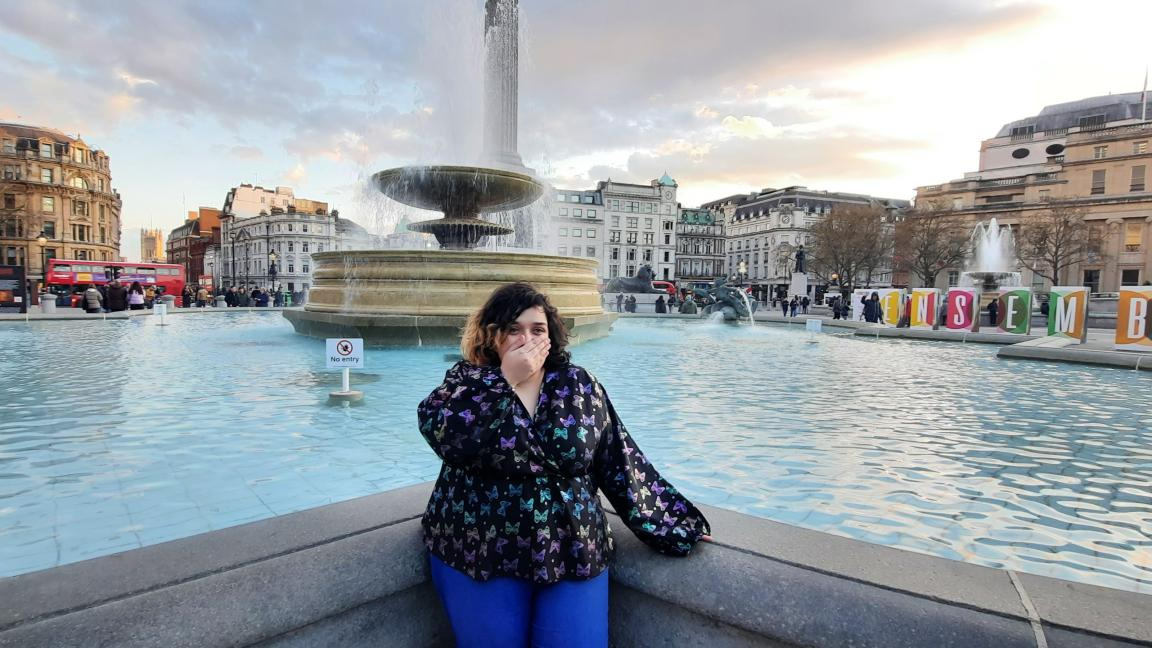 ‘Friendship, to me, is having that trust with somebody.’

My name is Monique Casey, and I work for Tales to Inspire. Throughout my life, I’ve struggled with family issues and mental health, but now I focus on pursuing happiness, and I’ve learnt that a work environment can be fun and comfortable.

For my entire life, I’ve lived in Bolton; it’s all I’ve ever known. Growing up, home life wasn’t exactly easy. From an early age, I experienced a lot of struggles at home.

I had a mum, dad, older brother and a dog. So from the outside, we looked like a regular, functioning family.

But the perfect family was an illusion, and behind closed doors, my dad was an alcoholic, becoming abusive towards the family.

My parents argued constantly, and my brother was always getting in trouble, so we had social workers around all the time.

My dad’s abuse was directed almost exclusively towards my brother and my mum, so I felt guilty that he never directly hurt me. Witnessing the abuse was difficult enough, and although my brother tried to seek help, none was ever given.

Despite a difficult home life as a child, I was surprisingly optimistic and dreamed of becoming a vet one day. I don’t think I realised anything was wrong with how I’d grown up because it was all I’d ever known.

Towards the end of primary school, a lot of problems began to sneak in. I started getting bullied, and that continued all through high school.

In Year 7, there was an outbreak of headlice, which I unfortunately caught. From then on, I was known as the girl with nits and people intentionally isolated me. They wouldn’t sit next to me and even made a show of not touching anything I touched.

The bullies also picked on me for my weight and even now, 4 years after leaving high school, I’m still self-conscious because of some of their comments.

I developed severe anxiety surrounding school, and although I confided in friends and teachers about what was happening, the situation didn’t improve; instead, I was called a snitch.

Even when my mum came in to speak with the teachers about the situation, nothing was done. Regardless, I don’t think intervention helps where bullies are concerned. Instead, I think bullies need to understand the weight of their words and actions on their own to change their behaviour.

At that point, I lost the optimism I’d had in early childhood, and I began worrying relentlessly about what people might say about me.

Things hit rock bottom in Year 9. My dad passed away from a heart attack. Things stayed at rock bottom for a while, and Years 9 and 10 were the worst of my life.

At the time of my dad’s passing, my family was still living together but there was a complicated dynamic. My dad was the breadwinner, so he would work during the day, but at night he would start drinking, and things would get much darker.

My family dealt with the passing very differently. My brother used distraction, going out all the time with friends, my mum tried to keep up with the routine she used to have, and I didn’t have my own strategy.

Everyone encouraged me to stay strong for my mum, and I became preoccupied with ensuring she was okay. In the process, I neglected my own feelings and didn’t allow myself adequate time to process my grief. As a result, difficult feelings often resurface.

After my dad passed away, we endured even more hardship as we were now in financial turmoil. My brother found it difficult to hold down a job due to his ADHD and autism.

My mother had also become very ill, receiving her diagnosis just a couple of months before my dad passed, her condition deteriorated rapidly, and I became her carer.

Between the constant harassment and insults at school and having to care for my mum, always putting her needs before mine, my self-worth hit rock bottom.

My grades began to slip majorly, and my teachers encouraged me to stay after school to work to pull them back up, but I couldn’t because I had to rush home to care for my mum.

At the end of Year 10, I received an official diagnosis of anxiety and depression. As a result, I needed to take some days off school for my mental health, which my mum allowed.

When I left school at 16, I thought college would be the fresh start I needed. So I picked a college about an hour away from where I lived.

Although I’d wanted to become a vet as a child, in high school, I realised that science wasn’t for me, but I loved the arts, so at college, I studied music, acting and photography.

I made a brand new group of friends who knew nothing about me. It was exactly what I wanted, and I finally started enjoying school.

But the support system at college was even worse than in high school. We had just one counsellor for over 1000 students, so there was a massive waiting list. You were only allocated 6 weeks of counselling before you had to go back on the list again.

At around a similar time, my mum and I had an argument, so I went to stay with a friend. Upon learning this, the counsellor informed the safeguarding team, and the woman there was horrible. She blamed the entire situation on me and told me to stop worrying my mum and go home.

I began crying and having panic attacks every single day. I didn’t trust the counsellor anymore, so I told my music teacher, who had to tell the safeguarding team.

I returned to the woman who had been horrible to me before, and she said something awful to me that I’ll never forget. She said I was just jumping from teacher to teacher, looking for sympathy.

I was doing better in my subjects, getting As, Bs and distinctions, but the lack of mental health support was still really tough.

The second year of college was pure confusion due to the pandemic. But I’d already applied for university and had a conditional and two unconditional offers.

I studied crime scene investigation at The University of Central Lancaster. I’d lost my passion for the arts when the pandemic hit, so I thought a beginner’s course in CSI might be interesting.

But it wasn’t for me, especially because each lesson was on a zoom call. So I decided to change my course and start a new one in games design. I thought it would be the perfect fit because I enjoy playing video games in my spare time.

Then it hit me. It wasn’t the courses I didn’t enjoy but the university as a whole. I was living with my boyfriend at the time alongside some other flatmates who I didn’t speak to much. It wasn’t the best situation.

It was November, and I’d been having an awful week at university. I wasn’t attending my online lessons, had started a new medication, and wasn’t eating properly or leaving my room.

I rang the university security team and told them I was experiencing suicidal thoughts and was concerned about my safety. They responded very poorly, so I hung up the phone, and from there, the rest of the night was a blur.

I woke up in Preston hospital after attempting to take my own life through overdose.

That was the turning point. I wasn’t allowed to leave the hospital for 24 hours and didn’t have any of my things, so I was left with only a dead phone and my thoughts for the whole stay.

I changed my mindset, deciding that the only direction to go from rock bottom was up. So I returned to my flat intending to move out after Christmas and promptly ended my 3-year relationship with the hope of focusing on myself.

I wanted to meet new people, so I turned to the online gaming community to meet others with similar interests. They didn’t know anything about me or my past and I discovered that many of them enjoyed the same sort of things as me.

I do understand the dangers of the internet, so I made sure to protect myself online. But when I joined a Discord server, I met some of my best friends. One of them is from Essex, and the other is from Lithuania.

I wanted a job, so I headed to the Jobcentre and spoke to a lady there. She told me about a kickstart scheme which helps people who don’t have experience gain those skills through employment which aids a small business or company.

There were a few opportunities in retail, but because of my mum’s situation and my anxiety, I needed something where I could work from home.

She booked me in for an interview with Tales to Inspire but informed me that there were 6 other applicants for the role, so I shouldn’t be disheartened if I don’t get it. But I got the job!

There’s been such a weight lifted, and I’ve realised I can work from home and care for my mum. Although I’ve encountered some challenges to my anxiety, they’ve worked to boost my confidence rather than pressure me.

Overall, I’m in a much more comfortable place now and have learnt a lot about myself and others through my past experiences. I believe that more should be done to tackle bullying. It should be taken more seriously and not brushed under the rug as it often is.

Following your passion around the world

ADVENTURE | ENTREPRENEUR | YOUNG PEOPLE
Manage Cookie Consent
To provide the best experiences, we use technologies like cookies to store and/or access device information. Consenting to these technologies will allow us to process data such as browsing behaviour or unique IDs on this site. Not consenting or withdrawing consent, may adversely affect certain features and functions.
Manage options Manage services Manage vendors Read more about these purposes
View preferences
{title} {title} {title}
Skip to content